I saw this on ABC national news, they didn't have a whole lot of information on this incident.

Thats an ugly situation all around, driver looks like he lost situational awareness until it was way too late. Nothing the plane crew could have really done. Condolences to the families of those lost.
Last edited: Nov 19, 2022

FFM1938 said:
Thats an ugly situation all around, driver looks like he lost situational awareness until it was way too late. Nothing the plane crew could have really done. Condolonces to the families of those lost.
Click to expand...

Actually, responsibility falls to the control tower on this 1. They should have situational awareness of the movement of all planes and vehicles on the runways. They obviously didn't have in this case.

True enough, one would assume if the pilot got the clear for takeoff the runway would be clear. I wonder if there was a comms issue with the ARFF units since both the trucks in the video were hauling across that taxiway onto the active
C

ARFF vehicles must get permission to enter an active runway. sadly the ultimate responsibility is the driver of the rig.

CFDMarshal said:
ARFF vehicles must get permission to enter an active runway. sadly the ultimate responsibility is the driver of the rig.
Click to expand...

Unless he was given permission by the tower.

Bulldog said:
Unless he was given permission by the tower.
Click to expand...

Even if he was given permission by the tower, the ultimate responsibility is with the driver.

In Vietnam I flew as an observer in a Cessna aircraft side by side with the pilot. After checks and arming we would then get ready for take-off. We would contact the tower, say "Trail 34 requests the active runway" Tower would acknowledge us and say we are cleared. Only after clearance from the tower would we roll. The worst aviation disaster in history occurred when a pilot thought he was cleared and rolled his 747 into another on a small island, 500+ died.

I just saw a news story that the Crash Trucks were participating in a drill and were not supposed to be on that runway.
E

On the aviation sites..trucks were responding to an alarm on the east side of Runway 16 from their station adjacent to the tower on the west side. This all should have been easily seen by the tower controllers. No word on clearance to cross the runway yet. The plane (brand spanking new) was moving at 126 knots when it hit the two trucks tearing off the right engine and the right main gear trucks. It stopped 8300 feet down the 11,000 foot runway.
N

lt seems neither truck knew the plane was there, the first truck turned right into it instead of away from it, if he had turned left, or maybe even kept straight, he would have been ok.
E

Authorities seem to have conflicting details:​

- that drill was coordinated ​

- the fire vehicle made "necessary arrangements" ​

- the fire vehicle was not authorized to enter the runway​

On Sunday, Lima Airport Partners, which operates the airport, said in a statement on Twitter that the firetruck had entered the runway as part of an emergency response drill coordinated between the operator and the air traffic authority.


"On Nov. 18, during the morning and until the beginning of the exercise, the firefighting team made all the necessary arrangements to execute the maneuver," the airport operator said.

"Control Tower (CORPAC) confirmed the start time 15:10, it being the time fixed for the beginning of the maneuver, and the impact with the LATAM aircraft occurred at 15:11."

Jorge Salinas, president of the board of directors of the Peruvian Corporation of Airports and Commercial Aviation (CORPAC), told local radio that the authorization for the drill had not included entry to the runway.

"There is no authorization for the entry of any vehicle to the runway. There is authorization to carry out an exercise, but it is outside the areas that currently have transit operations," he told radio station RRP on Saturday. 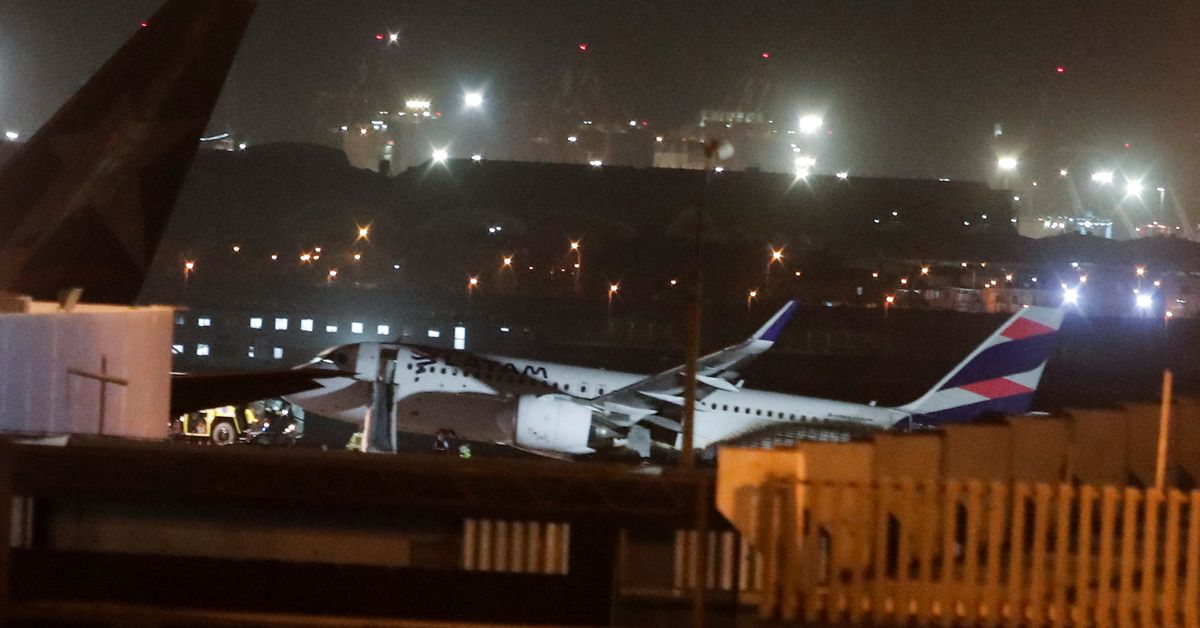 The operator of Peru's capital airport said on Sunday that a firetruck involved in a dramatic and fatal collision with a LATAM Airlines passenger jet had been doing a pre-arranged emergency drill. A Fire Drill, main factor of the LATAM crash in Peru Airport

On Sunday morning, November 20, hours after resuming operations after clearing the runway, Lima Airport Partners issued a statement describing the actions that

I would like to see transcripts of the conversations between the tower and the fire vehicles as well as the aircraft .I cannot see any fault with the aircrew, they were given clearance to go and they went.
E

I agree with Da Grump. This is the "Let's blame the dead firemen" press release.

Years ago I got a tour of Houston FD Station 81. It's the ARFF station for William P. Hobby Airport in southeast Houston on Koonce St. on the south side of the field (HFD Training Academy is about 5 blocks south on Braniff St.). The old ARFF quarters was in Station 36 on the north side and still have the engine and medic. 81's apron leads directly onto the taxiway parallel to Runway 13R. About 150 feet from the station is an alternating black/yellow painted stripe (which you can see on Google Earth). The shift working told us that apparatus was forbidden, under any circumstances, from crossing that hold line until given radio clearance by Hobby Ground Control in the tower.

The Lima Airport has only one runway; 16-34. A second parallel runway is presently under construction to the west. It appears that a new control tower has been built between the two. The new ARFF station is directly adjacent to the tower to the south. With the new station it would seem appropriate to be testing response routes from quarters to any part of the field. However, at present, literally everything- terminals ,hangars, fuel storage, flight line, and parking is on the east side of 16-34. To get to anything you HAVE to cross the runway!

Firefighters that work at airport crash stations (besides being bored) know every square inch of the field, all the relevant rules and SOP's, and the tempo of operations. It's hard for me to believe they didn't know that airliner was a couple of thousand feet up the runway and that they proceeded across it without permission.
M

The flight crew was jailed for two days.

That looks to be an aviation accident investigation technique in third world countries.

It seems if you were doing a timed response test to a location on the airport, stopping for a minute or two to watch an airplane take-off would be a waste of time. Maybe those poor guys assumed (or were told) that the coast was clear.

I think that in the US, the FAA requires the ability to get anywhere on the field in three minutes.

entropychaser said:
The flight crew was jailed for two days.

That looks to be an aviation accident investigation technique in third world countries.

It seems if you were doing a timed response test to a location on the airport, stopping for a minute or two to watch an airplane take-off would be a waste of time. Maybe those poor guys assumed (or were told) that the coast was clear.

I think that in the US, the FAA requires the ability to get anywhere on the field in three minutes.
Click to expand...

Just talked to Grump Jr, when he was a AFNG ARFF @ Peoria it was 3 minutes. You watch a show where there in an incident while the plane is on the ground and someone is reaching in the overhead bin for their bag. Leave the damn bag there and get the hell off the plane. It isn't that important and you are holding up those who want off! By the way also the European Committee is thinking about reducing the flight crew from 2 to 1. Don't worry though, that is a non-starter here!
You must log in or register to reply here.
Share:
Facebook Twitter Reddit Pinterest Tumblr WhatsApp Email Share Link
Top