Great story in the obit about how he beat the height requirement to get appointed.

^^^^^ Yes when the height requirement was in there were some height challenged candidates who the night before slept on the floor & rode laying flat to the exam & were carried into the exam room on a door or ironing board.......many more than otherwise qualified candidates never got OTJ because of the height requirement back then both on FDNY & NYPD......back in 1965 when I took the NYPD exam they were knocking candidates for bad teeth until corrected....I guess they did not want to have someone get hired then go sick with tooth related problems.

^^^^Too bad Chief Lloret did not make one more Veterans Day.

My sincere condolences to his family and friends. He was a great firefighter with an awesome personality. I worked with Bill in L 150 ( the hogs ) Where he was always upbeat and a pleasure to work with. Rest In Peace brother!

FF ROBERT PAINTER LAD*39.... REST IN PEACE BROTHER.....PRAYERS FOR THE COMFORT OF THE FAMILIES... 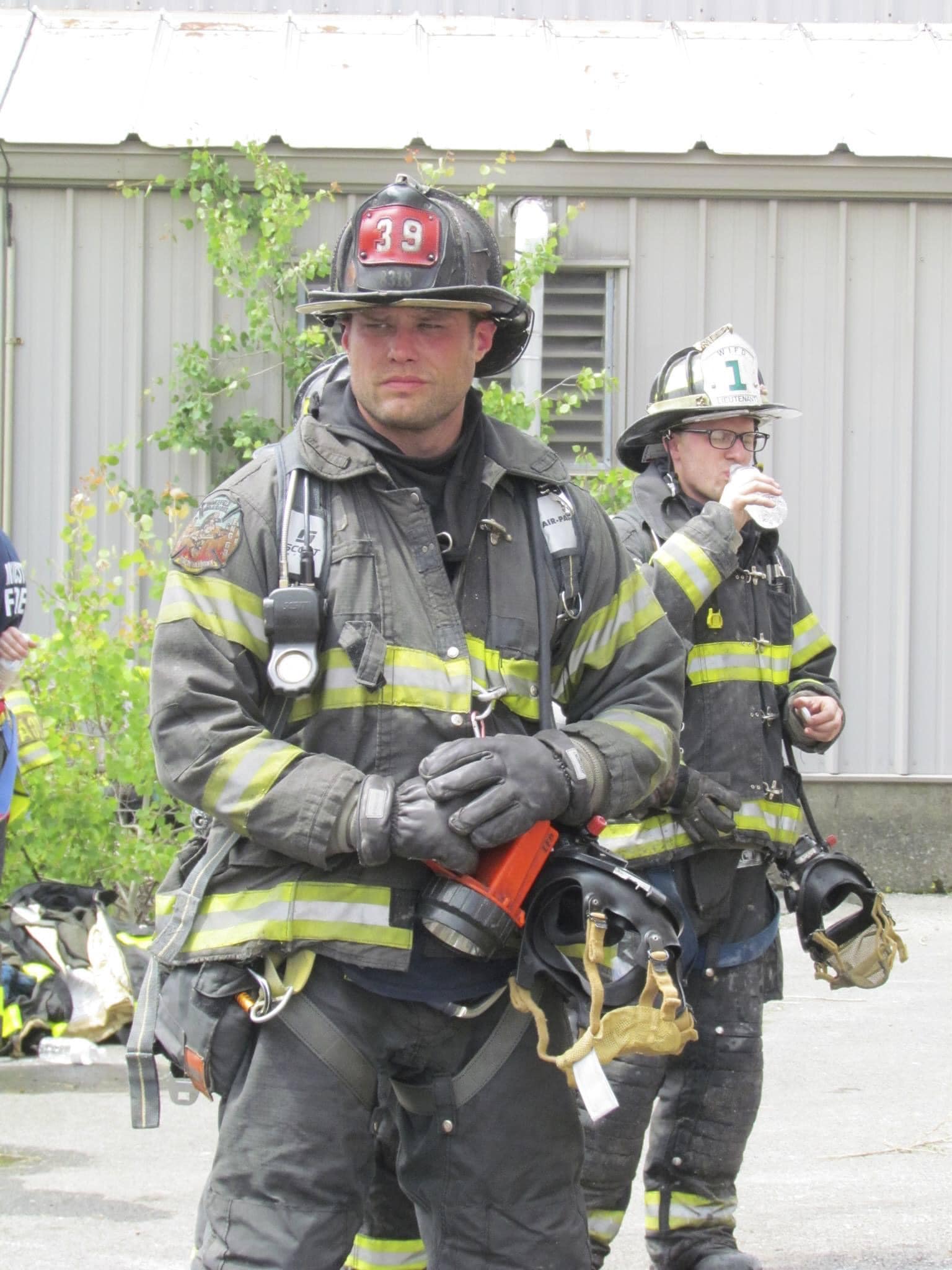 ^^^^^
With more than the usual number of calls for odor of
smoke or working fires started accidentally by illegal fireworks, the Fourth of July is always a busy
night for the Fire Department. But not all fires are accidental
and the ones that are set intentionally are meant to be more
severe, usually by someone seeking total destruction.
Someone removed a gas meter from a second-floor apartment
at 708 East 243rd Street in the Bronx. That action placed the
members of Engine 63 in a life-threatening situation and tested their resolve.
The evening of July 4, 2008, was still young for FFs Jonas
G. Adams, Jr., Anthony M. Cuozzo, Philip Marino and Robert
W. Painter, working the evening shift in Engine 63. Lieutenant
John M. Flaherty, Battalion 15, was the Officer assigned to the
engine for that tour. At 1953 hours, the computer spat out a
report of a phone alarm for a fire in the six-story multiple
dwelling where the above-mentioned gas meter had been
removed. As they were responding, the dispatcher warned
incoming units that there were numerous phone calls and
reports of fire on the second and third floors.
The building’s location in the uppermost corner of the
Bronx, one block from the Westchester border in Mount
Vernon, meant that there would be a delay for secondary units
responding. From three blocks away, the responders could see
a heavy volume of ominous, black smoke, billowing from the
roof. As the Engine 63 chauffeur pulled up to the reported
address, the members could see deadly flames lapping out the
second-floor windows in the throat of the building.
He bypassed the hydrant in front of the building to facilitate tower ladder placement in that strategic position and
instead positioned the engine on the corner of White Plains
Road. The members of Engine 63 quickly worked to get a first
line in position as a crowd began to gather to watch the growing inferno and residents self-evacuated the building.
When they reached the second-floor landing, Firefighters
were met with a high heat and heavy smoke condition from
fire emanating from the open fire apartment door. Lieutenant
Flaherty and Lieutenant Mannion, Ladder 39 covering,
attempted to pull the door closed, but the volume of flames
proved too much for the limited extinguisher water from
Ladder 39’s extinguisher Firefighter.
Calling for a second line, but knowing that it would be
delayed, Lieutenant Flaherty called for water and led the
members of Engine 63 in gaining control of the interior stairs
and then the hallway as they worked their way toward the fire
apartment. As they crawled down the floor with blue flames
shooting out of the apartment door, they had to muster every
ounce of courage to make the turn into the fire apartment. The
blue flames they saw were coming from the gas pipeline
where the meter had been removed and the intense heat had
set fire to the whole apartment.
As other units began to fight, the fire extended to the floor
above and other apartments. The members of Engine 63 continued to claw their way into the fully involved apartment as
the gas-fueled flames roared over their heads. When all visible
fire had been knocked down and the gas supply had been shut
down, they were relieved by Engine 38 members, who continued to extinguish pockets of fire in the charred apartment.
Had it not been for the aggressive efforts of the members
of Engine 63, with no second line to back them up, the fire
could have quickly spread to envelop the whole building. For
the skill, determination, courage and teamwork displayed by
Lieutenant John M. Flaherty and FFs Jonas G. Adams, Jr.,
Anthony M. Cuozzo, Philip Marino and Robert W. Painter, the
Fire Department is proud to present the Lieutenant James
Curran/New York Firefighters Burn Center Foundation Medal
to Engine Company 63.--JT
LIEUTENANT JOHN M. FLAHERTY (BN-15)
FF JONAS G. ADAMS, JR.
FF ANTHONY M. CUOZZO
FF PHILIP MARINO
FF ROBERT W. PAINTER
July 4, 2008, 1953 hours, Box 75-3886, 708 East
243rd Street, Bronx
ENGINE COMPANY 63 ..... 2011 MEDAL DAY BOOK..

I just recd word that on 12-7-22 a Friend going back to the Fifties has Passed To A Higher Level at 77 yrs of age in his longtime Home in Pawleys Island SC & now joins His Wife Patricia who after almost 50 yrs of Marriage had Passed To A Higher Level in 2019..... In the FDNY he was referred to as George which was also his Fathers first name but at home to avoid confusion he was called Tommy (his middle name) as kids hanging out we always also called him Tommy....he was Appt to ENG*45 & one day we had to pick up a spare LAD in the then new Qtrs of LAD*58....I asked a FF if Tom Mayerhofer was working & he said there was no one by that name there....I thought I had made a mistake in what Unit Tommy was assigned to....when I walked into the kitchen there was Tommy.....thats when I found out about the George ID OTJ...Tommy ( / George ) was a familiar face at UFOA Mtgs....... going back at one point many years ago Tommy had 5 siblings & his Parents wanted to have one more but they had Triplets so he then had 8 Siblings.....His Dad was a FF in LAD*142 & his Uncle was a LT in ENG*293......two of his other Uncles owned Mayerhofer's Candy store on Jamaica Ave bet 89 & 90 St across from one of the three Schmidts Ice Cream Parlor's along Jamaica Ave (one at 90 St & one at 94 St & one at 104 St each owned by one of the Schmidt Brothers....the 94 St one remains strictly as a Homemade Custom Chocolate & Candy Store run by the Grand Daughter of the original owner with a tremendous following of customers selling to walk-ins...Dept Stores & online worldwide... https://www.qchron.com/editions/que...cle_ac630fc7-b99f-590e-99b1-2bfcd6fac47d.html She Margie grew up around the corner on 94 St a few doors from Tommy Mayerhofer's childhood house .) .....REST IN PEACE BROTHER ....THANK YOU FOR YOUR SERVICE BOTH MILITARY (USMC) & FDNY ....PRAYERS FOR THE COMFORT OF THE FAMILIES .........PHOTO & OBIT...